I’ve just sown a dozen seed trays with English Wallflower seed. We sow these biennials during late summer so as to have decent sized plants to row 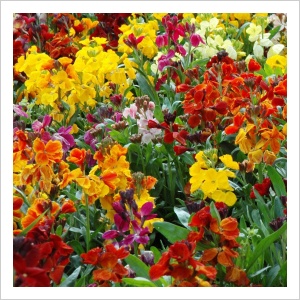 out when we plant tulips after Anzac Day. Sowing a hundred seeds to a tray gives them enough space to make a big enough plant to be dropped straight into a 10cm pot 4 to 6 weeks after sowing.

During the 1950s my uncle Cyril used to grow tens of thousands of wallflowers every year at his nursery in the English East Midlands. I worked for him on weekends and during school holidays from the age of 12 until I was 15 when my parents moved away from the village.

Seeds would be sown in drills in seed beds during late spring and early summer and would be planted out into the nursery field during late summer. My job was to keep my cousin Eric supplied with the seedlings which he manually planted at an astonishing speed. The seedlings were dipped in sooty water first and then I would lay out the plants, evenly spaced, next to a taut string line. We worked from early morning through to the evening taking our tea breaks squatting in the paddock. My great aunt Lizzie would bring a thick jam sandwich wrapped in newspaper and an enamel mug of hot, strong, sweet milky tea out to the field where we were working. We didn’t wash, this would have meant wasting time on a long walk back to the sheds, but the newspaper protected the sandwich from the mud and soot which caked our hands. 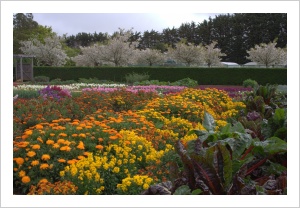 After planting out, the wallflowers would make a spurt of growth before winter set in. During a mild spell in early spring they would be dug, have the soil shaken from them and tied into bundles of a dozen, dipped into a trough of water, wrapped in newspaper and taken to market. Once planted in gardens they would burst into flower and fill the air with their sweet fragrance during spring and early summer. These field grown wallflowers would make huge plants in their final home, much too big to inter plant with tulips the way we do it here at Lambley.

Our 10cm pot plants are an ideal size for the tulip beds. First of all we plant the bulbs 10-15cm deep and about 15cm apart. We then plant the wallflowers on top of the beds at 45-50cm spacing. With luck the wallflowers and the tulips will flower at the same time. This is unlikely with the early flowering tulips but it usually works out with the mid-season and late flowering varieties.

The award winning Sunset strains of wallflowers are more and more taking over from older varieties in Europe and North America. Compact, sturdy and vigorous and consistently flowering true to type they are now available in a great range of colours.

Whilst we sow them in seed trays they can also be direct sown as long as the soil is not allowed to dry out before the seeds germinate.