I lived in Carlton close to the Melbourne CBD when I arrived in Victoria fifty years ago. My flat was above an Italian restaurant in Lygon Street. On the opposite side of the street was a small park which had a garden bed about two metres wide and thirty metre long. This bed, which faced Lygon Street, was planted twice a year with annuals. The summer bedding scheme was, more often than not, a glorious display of Zinnias. 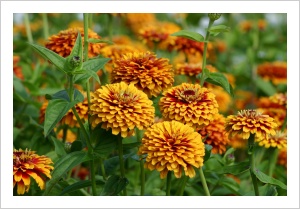 At that time the Giant Dahlia Flowered strain was most commonly found and its riot of bright fully double flowers, rose, orange, yellow, violet, scarlet, white and coral was a joy to all but the most hard hearted.

Zinnias aren’t seen as often now as they were fifty years ago. One of the main reasons is that they are susceptible to damping off disease which causes seemingly healthy young seedlings to collapse and die. It is particularly the case with plants raised under cover in pots, plugs or seed trays. Planting seed straight out into prepared garden beds is more likely to bring success. We hardly ever have a problem in our own garden.  Mind you I don’t sow Zinnia seed whilst the soil is cold and wet which means mid-November at the earliest and often it isn’t until December.

As all the seed I use is good quality I generally plant one or at the most two seeds about 25 to 30cm apart thinning to one seedling soon after the first true leaves are formed. If the soil is warm it shouldn’t take more than a week for germination to occur. As Zinnias love heat I always plant them in a sunny bed.

Blooming starts around the end of January, depending on weather conditions, and there are still flowers to pick in April.

When I was young there were only mixed colour strains but over recent years seed companies, such as the German Benary, have bred single colour lines. These strains are very popular with cut flower growers but are also really good in the home garden if a particular colour is needed.

I still like to grow a bed of the old Giant Dahlia Flowered mix every year as it is one of the great pleasures of summer. Six years ago Margaret Olley flew to Victoria to be at a major retrospective of my wife, Criss Canning’s work at the Ballarat Art Gallery. Olley stayed the night with us and I picked a posy of Zinnias to place on her bedside table. The next day she popped them into her bag and carried them on her flight back to Sydney. A week later I got a phone call from her asking me to send another bunch to her exactly the same as the first one as she was in the middle of painting them and needed some fresh flowers to replace wilted ones.

To cut a long story short I sent a bunch a week for several months. Every summer, until Olley’s death, I would get a call asking if the Zinnias were ready yet and I’d send a bunch to Sydney weekly for two or three months. These bunches would be picked in the early afternoon, packed into a box and taken to the Creswick post office and without fail be on Margaret Olley’s doorstep by 10 the following morning. I was thrilled when she named one of her paintings, in an exhibition at Philip Bacon Galleries in Brisbane, “David’s Zinnias” 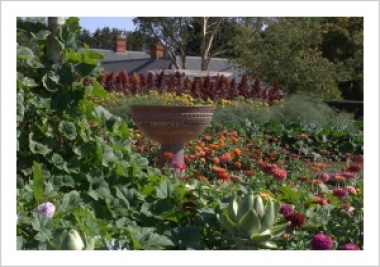 If their few needs are catered for Zinnias are easily grown. The common or garden species comes from Mexico and tolerates the hottest weather. Even when temperatures hit 40C the flowers stand proud and unscorched. I water them once a week during the driest times but this is mostly because I grow them amongst vegetables which need regular irrigation. Zinnias themselves are quite drought tolerant when once established.