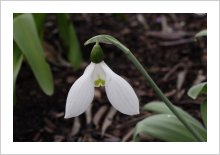 This year the first Snowdrop (Galanthus) bulbs started flowering well before we’d seen the back of June. Normally at Burnside it is well into July before they flower and are at their best during the second half of the month. A planting of some mixed Galanthus caucasicus seedlings under an olive tree in the dry garden has given much joy. The olive tree branches in this area are taken up to about two metres. All small branches, any feathering and any hanging branches are removed. This gives a clean bare trunk and allows plenty of winter light for the Snowdrops. 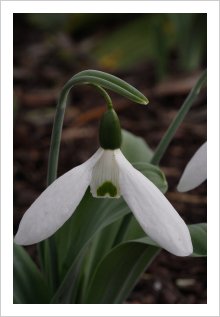 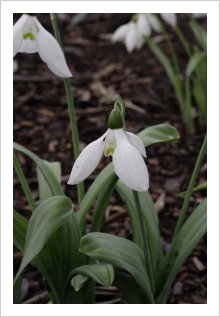 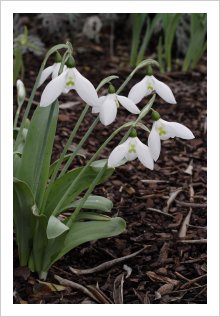 During summer the olive trees shade the bulbs from the sun during the hottest part of the day and a planting of Mexican Sage, which we cut to the ground in late autumn, gives added shade during the hotter months. I’ve found that as long as snowdrops get summer shade they cope with any amount of summer and autumn dryness although it must be said that extra watering in summer does them no harm. I grow about a dozen different varieties and have them planted in several different areas. 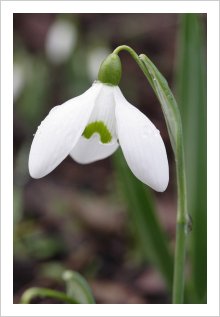 The biggest planting is of Galanthus ‘Arnotts Seedling’ which now makes pretty good drifts under some old elms below the dry garden. My first snowdrop memory was a of beech copse alongside the drive into the Lambley village rectory where tens or even hundreds of thousands of Galanthus nivalis had naturalized. We choir boys were allowed to pick bunches to take to our mothers.

Whilst snowdrops have naturalized in English woodlands they are mostly found around former monastic and ecclesiastical sites and are thought to have originally been brought back by returning crusaders. There is some confusion amongst Australian gardeners mistake the commonly found snowflake, Leucojum aestivum, for Snowdrops. Whilst related the two genera are easily told apart as Galanthus have three large outer petals (more correctly called perianth segments) enclosing three smaller inner petals whereas in Leucojum all the petals are of equal size. 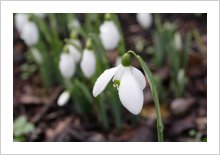 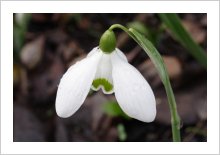 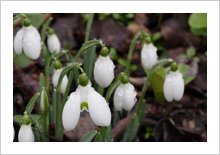 From the vegetable garden we have been picking Brussells Sprouts for several weeks now. It’s a crop that requires patience and planning. For best results or in fact for any result at all seed needs to be planted during November or, in the case of hybrid seed, early December. Bought seedlings should be planted out in their permanent positions no later than early January and spacing of ninety centimeters by ninety centimeters would be about right. Brussells Sprouts seed is best bought from a specialist seed merchant such as New Gippsland Seed Farm. Hybrid seed is much better than open pollinated seed if you want to pick some vegetables for the pot rather than make an ideological statement.

One of my favourite ways of cooking this vegetable is to heat some butter with salt and pepper in a pan until the butter starts to sizzle then add thinly sliced sprouts and braise to them to the point of browning. Cooking this way brings out a rich nutty flavour. Mind you I like them just plain boiled with melted butter poured on them.

I plant broad beans in July. There isn’t a lot of point planting them much before as early spring frosts causes flower drop and no beans set. Whilst plants of broad beans look sturdy enough if they are not staked they always crash to the ground during spring tempests. I drive two stout stakes about twenty centimeters apart at each end of the row and run soft twine on each side of the beans to hold them in.