Occasionally, very occasionally in gardening reality comes close to the dream. A flower border made up of a mixture of shrubs, perennials, bulbs, climbers and annuals growing together cheek by jowl is so beautiful that even I, the garden’s fiercest critic, am besotted by it. 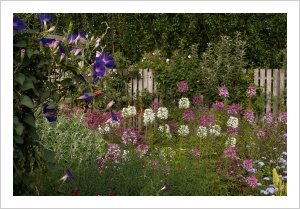 We do a major revamp in this border some time during late October or early November when the thousands of tulip bulbs and the accompanying biennial wall flowers are dug up. After forking the soil over we bed out summer/autumn flowering annuals, raised in a poly house, to take their place. As soon as these seedlings are planted we usually remulch. This year we didn’t get around to it and the result has been a germination of an abundance of weeds and, more happily, an abundance of self sown annuals. I don’t mind pulling weeds as long as they are small. It’s one of the pleasures and when a bed is weed free I like to give myself a gold star and an elephant stamp. 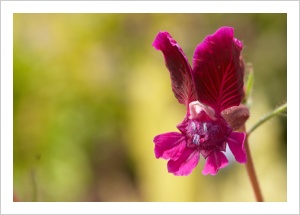 A few years ago I raised a few plants of the Bat Faced Cuphea (C. lanceolata ‘Purple Passion’). As I’d only been sent a very few seeds for trial I sowed one seed per 5cm pot and planted the resulting dozen or so seedlings into the garden in November. It isn’t safe to plant anything frost tender before November as we nearly always get late spring frosts. The Cuphea weren’t exciting that first year but this year self sown seedlings of ‘Purple Passion’ have put on a terrific show. Especially beautiful is a group that have intertwined with a cutting grown Ageratum houstonianum, tall white, pink and amethyst Cleomes and two self sown groups of Celosia, one with lime green feathers called ‘Sylphide’ and the other with magenta spikes called ‘Ruby Parfait’. Both of these Celosias were bred for cut flowers and so are taller than the bedding varieties most often seen in garden centres and thus more useful in a large border. 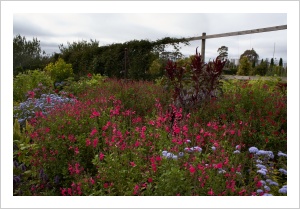 Love-Lies-Bleeding, Amaranthus caudatus, is a very prolific seeder and if we didn’t pull most seedlings out whilst they are small the whole border would be overwhelmed by them. I do leave a few clumps of the ‘Emerald Tassels’ strain and also the tall dark handsome, red leaved ‘Opopeo’. The latter doesn’t bleed at all but holds it rich dark crimson heads bolt upright. This strain was also bred for the cut flower trade. In our garden it will grow two and a half metres tall and looks good from January until the end of April. 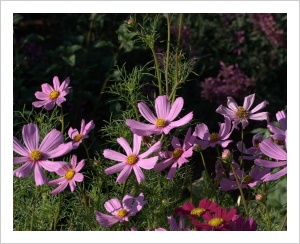 Cosmos of course self sow but we have a rabbit plague at the moment and most Cosmos seedlings get grazed down to a few centimetres. A few escape this attention though and one particularly fine carmine flowered seedling is making its presence felt flowering amongst Ageratum and Agapanthus ‘Loch Hope’ a tall deciduous clone with deep violet flowers touched with a hint of purple, raised many years ago in the Savill Gardens at Windsor Great Park.