I’ve grown Salvia guaranitica for the best part of 50 years although to start with I had it as Salvia ambigens as the late Dennis Norgate sold it. Norgate’s plant ran at the feet too much for most garden situations and to my mind the size and number of flowers were too small for such a bulky plant growing as it did some 160cm tall by 100cm across.

Over the past few years there have been some exciting new forms and hybrids of S. guaranitica and I have four different clones growing in a long wide flower border in the vegetable garden. Two are especially good. 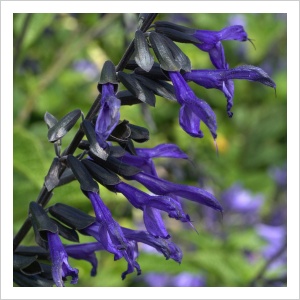 Salvia guaranitica ‘Black and Bloom’ has very large navy blue flowers set in black calyces on black flower stems. Even in bright sunlight the variety has a glow, an inner light unlike many flowers in these tonings which appear leaden in the harsh light of a Central Victorian summer.

“Black and Bloom’ has made 150cm in height and 100cm width in this its second year. The foliage in the garden is quite large, deep green and slightly rugose. In pots the leaves can be yellowish.

The second cultivar , S. ‘Amistad’, The Friendship Sage, is a startlingly beautiful new variety of Salvia. More than likely a hybrid, ‘Amistad’ was found by the Argentine Salvia aficionado, Rolando Uria, either in a market or a garden, reports differ. In its second year it has grown some 180cm tall and is pretty much smothered in flowers from early summer until winter. The large flowers are purple and set in purple-black calyces. 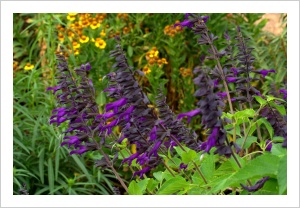 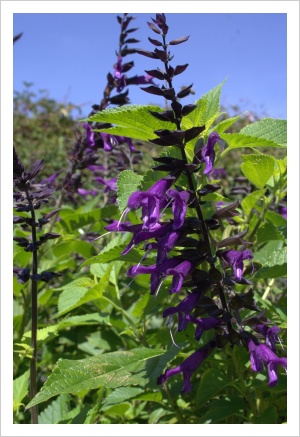 The border where I grow these Salvias is fifty metre long and five metres wide. A family of New Holland Honeyeaters, two parents and three fledglings, spend their days there. Supping on the flowers of Salvia guaranitica in all its guises is their favourite activity.