Allium giganteum is by far the most telling of all the ornamental onions. It has cricket ball sized heads tightly packed with hundreds of glistening amethyst-mauve flowers set on a 120cm or moretall stem. It flowers here in late November and early December here a month later than the other large drumstick Alliums. A couple of dozen grew splendidly in the dry garden for many years, even self sowing, but the wet spring and summer of a couple of years ago when we had more than 300mm of rain in January and 100mm in February polished most of them off. Happily a few self sown seedlings survived and are flowering this year.

Allium giganteum is one of the most difficult of the genus to grow and many gardeners have no luck with this species at all. It’s easy to be disheartened as the bulbs are expensive to buy and sometimes don’t come into growth at all.

The bulb is susceptible to penicillin mould. If the bulb you buy has signs of a green mould on the surface it is infected. This mould can cause the bulb to rot in the ground before growth begins. If there are signs of mould on any Alliums I buy then I drench the bulb in a fungicide both when I get them and again just before planting. This is one of the few times I ever use horticultural chemicals.

I plant Allium giganteum during March, although early April wouldn’t be too late, in good humus- rich, well drained soil, with plenty of lime added, in a spot which gets all the winter and early spring light. This Allium doesn’t tolerate being shaded by other plants whilst in growth nor does it cope with boggy soils. By mid-spring the foliage will start to die down and the flower stem begin to grow. It is then safe to allow perennials, many of which commence growth at this time, to cover the ground where the Allium is planted as the Allium’s leaves have done the job of building up the bulb for the following season. The flower stem will quite happily grow through the perennials. I keep the soil fairly dry during summer.

The best way to increase this bulb is to collect seed when it ripens in late December and early January. It germinates readily, as will most of the larger flowered species, if planted in pots or outside seed beds during early March. If looked after seedlings will make flowering size bulbs in five or six years. 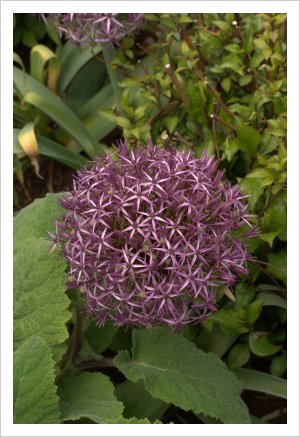 Luckily for us not all of the large flowered onions are this difficult. The easiest of all is Allium cristophii which flowers during October. I grow it in the dry garden between plants of the deciduous Ceratostigma willmottiana where it produces its huge heads of metallic purple flowers just as the shrub starts to produce new growth in the spring. I treat the easily grown, taller flowered A. jesdianum in the same way.

A.jesdianum ‘Akbulak’ was collected quite recently in Uzbekistan. It is similar in habit and as easy to grow as the better known A. aflatunense ‘Purple Sensation’. Each has countless rich purple flowers in a tennis ball sized head on metre tall, self-supporting stems. A drift of these obliging bulbs makes a bold statement in mid-spring. Both increase well and are quite inexpensive to buy. 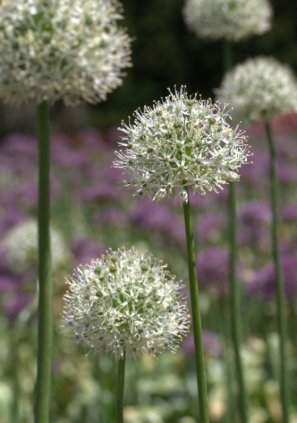 A hybrid between Allium aflatunense and A. stipitatum is the white flowered ‘Mount Everest’ which flowers for much of November. A single plant can get lost in the garden but a drift of a dozen or more makes an impressive display. Handsome green seed heads carry on the show well into December. 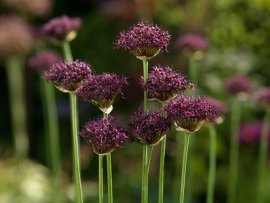 The darkest flowered of all these drumstick Alliums is A. atropurpureum from Southern Europe. It carries golf ball sized heads of dark, almost black, maroon-purple flowers from late October well into November. It’s very easily grown and increases well as long as it is planted in a sunny well drained spot.