My father let me have my first garden bed when I was eight or nine years old some sixty five years ago. The bed, surrounded on three sides by a dry stone wall, measured 90cm by 180cm. I crammed as many plants as I could get my hands on into it including a Forsythia. As anyone who has ever grown them knows Forsythias are vigorous fast growing shrubs which eventually will quickly become very large. Within a couple of years my little bed was soon all Forsythia. For a few brief weeks during early spring my little garden was a total joy when a three metres tall cascade of bright yellow broke through the grey gloom of an East Midland winter. 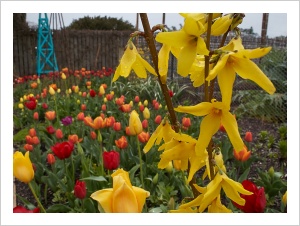 Whilst I didn’t know it at the time my childhood Forsythia was probably the F. suspensa var. sieboldii which was brought from a Japanese garden into European cultivation during the first half of the 19th century. This variety has a weeping habit.

Fifty years ago I came across the same or similar plant whilst maintaining a Melbourne garden which had been designed and planted by Edna Walling who did such wonderful work from the 1920s until the 1960s. This particular garden was set on a steep site and Walling had planted the Forsythia so that its weeping branches tumbled into a small pond.

Until recently all the Forsythia species, forms and hybrids in cultivation grew into large shrubs some 3 metres tall by as much across. All that is except the particularly nasty looking miniature Forsythia viridissima ‘Bronxensis’. This grew in the garden of the old Boulters Nursery where I worked for several years. ‘Bronxensis’ makes a stumpy stiff shrub of about 60cm by 60cm. It flowers very sparsely and has none of the willowy elegance of the taller varieties. It seems to have passed unmourned from present day Australian nursery catalogues. 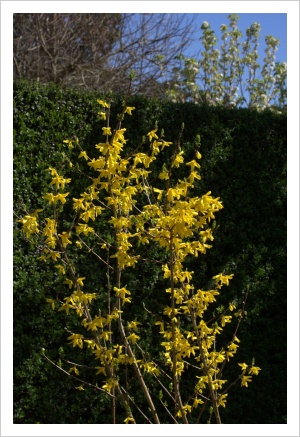 Hybrids between F. viridissima and F. suspensa make up the bulk of the commonly grown varieties nowadays. F. x intermedia ‘Lynwood Gold’ or more correctly ‘Lynwood Variety’ was raised in 1945 in an Irish garden and is one of the best currently available. It grows into a large plant which is smothered in lemon yellow flowers in September. We pick bunches of 150cm long wands which last for a week or so inside. ‘Lynwood Gold’ at 3 metres by 3 metres grows too large for smaller gardens.

A few years ago at one of the rare plant fairs I bought a couple of plants of F. ‘Gold Cluster’ a French raised variety which has all the virtues but only grows 120-150cm tall by a little less across. Happily it flowers at the same time as the early tulips and is a perfect companion for them. After flowering ‘Gold Clusters’ produces good dark green foliage which turns purple-black in autumn.