This morning I was walking along a path in the vegetable garden to the tomato trellises to disbud and tie in the tomatoes, a once a week task at this time of the year, when I got a strong whiff of cloves from a bed of French Chabaud carnations. 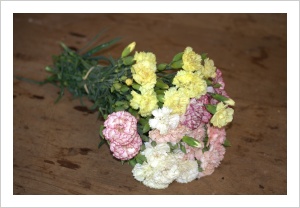 I’ve grown many pinks and carnations over the years which were reputed to be clove scented and yes, if I tried hard enough, I could get the faintest of faint hint of cloves.  Chabaud carnations are something else being almost more clove scented than cloves themselves.

During Elizabethan times and times before and times after personal and public hygiene was so awful people carried or wore as necklaces small bunches of fragrant flowers called nosegays to mask the stink. Clove scented pinks, the forerunners of carnations, were very popular nosegays because of their strong fragrance.

The Chabaud seed strain is reminiscent of ancient French varieties of carnation. They have fully 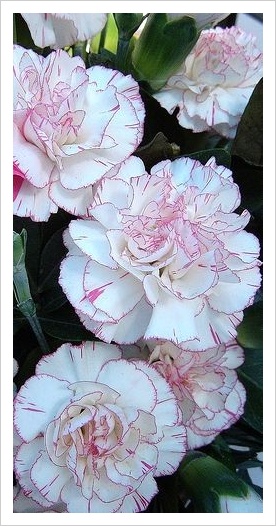 They have fully double flowers, smaller than commercial varieties, in soft lemon, soft pink, white and picotee on 30cm tall stems and make splendid cut flowers lasting a week or so inside.

I planted my bed in November from seed sown in early September and expect to pick many bunches over the next few months. These French heirloom carnations which date back to the 19th century have fully double frilly flowers, some 4-5cm across, with a delicious sweet spicy clove fragrance. Occasionally single flowers will be produced. Best sown in individual small pots during late winter or early spring or direct sow mid-spring. Flowering starts mid to late summer.