Cabbages the size of cricket balls, hybrid disease resistant tomatoes which rival the best heirlooms in taste, red leafed kale as beautiful as any flower, baby leaf lettuce, mustard, rocket, bok choi, endive and a hundred different broccoli varieties set out in parade ground order on an acre or so of land in Werribee, Victoria. 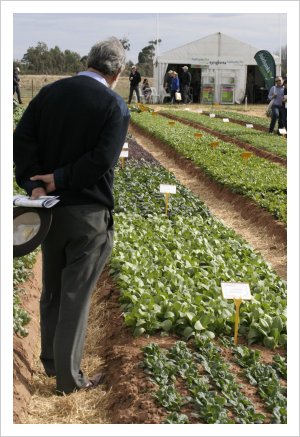 The biannual National Vegetable Expo, held over two days in early May, gave commercial seed houses a chance to show their latest varieties to hardnosed vegetable growers and me, a wide eyed, gob smacked nurseryman-gardener.

Northern European consumers and retailers increasingly prefer small growing cabbages and Bejo Seeds, a family owned Dutch company, is a leading innovator in this market. Gonzales is a white cabbage recommended for autumn and winter production, although I grew a spring/early summer crop successfully this season, which makes dense sweet heads a little larger than a cricket ball. This variety stands well in the garden and resists splitting so it can be harvested over a long period, six weeks or more for early plantings and two months or more for later.

The latest in salad breeding is the Salanova range. These are dual purpose lettuce which are grown to full size but don’t heart up so that when they are cut the leaves fall loosely and are used as baby leaf. All the different leaf shapes and colours that can be found in a baby mix can be found in Salanova lettuce. Whilst it isn’t an advantage to people like me, who eat their salad greens within an hour or two of picking, Salanova has a terrific shelf life, much better than typical baby leaf lettuce.

One of the aims of just about all modern lettuce breeding is to produce varieties which are resistant to lettuce aphid. Nasonovia ribisnigri is a pest that appeared three or four years ago, seemingly out of nowhere, in my lettuce patch. I didn’t take it personally; this aphid has become a major problem in lettuce growing areas the world over. 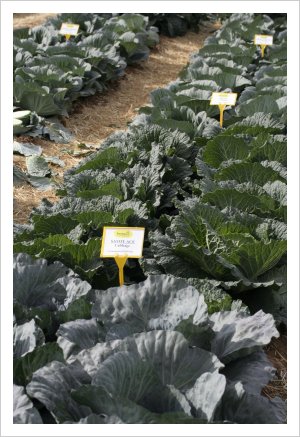 Breeding disease resistance is a high priority for modern seed companies. There can hardly be a fruit or vegetable more prone to disease than tomatoes. Any number of wilts, viral, bacterial and fungal as well as eel worm and goodness knows what else infect poor old tomatoes. There isn’t a lot of point planting the tastiest heirloom variety, and some are incredibly flavoursome, if the vine succumbs to disease before any fruit ripens. Many home vegetable gardeners, me included, are finding it impossible to grow the most common varieties offered to amateur gardeners in garden centres, box stores and seed catalogues. At the Werribee field day I tasted a modern hybrid cherry tomato which had an amazingly rich tomato flavour. Amarosa is surely one of the best tomatoes I’ve ever tasted. It has a good disease resistance package so it’s bound to be a hit with home gardeners when it becomes available.

There is so much good honest breeding being done by seed companies both large and small that to limit a garden to “heirloom” varieties seems to me to be not only perverse but silly. Sadly there is some confusion in the minds of gardeners about the difference between hybrid seed, which is vegetable breeding done in a quite traditional way, and genetically modified seed. In the case of the latter the precautionary principle should apply. In the case of the former we should celebrate the achievements of modern seed breeders so marvelously displayed at Werribee. 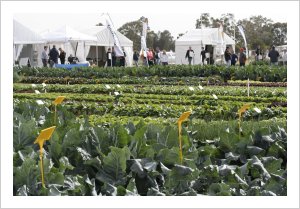