A basket full of vegetables

Every week I pick a basket full of vegetables for our Ballarat children and grandchildren.

Today, the 22nd of April, I’ve still been able to pick a swag of tomatoes. The most productive of the red cherry tomatoes is Felicity, an F1 hybrid bred by a subsidiary of the French seed company Limagrain. This company was started by a group of French farmers in 1965 and is still owned by farmers. 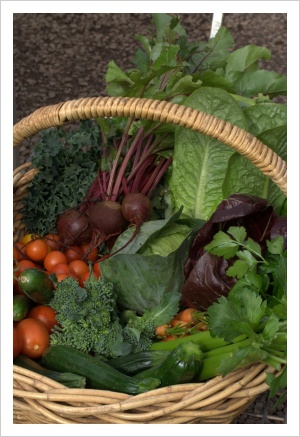 Felicity has a terrific disease resistance package which accounts for its vigour and productivity. It also accounts for its long cropping season from early January until the first heavy frosts here. Flavour is excellent and the fruit is resistant to cracking.

I’m still picking a few tomatoes from Zesty F1, a yellow grape variety, which a visitor to the garden, when biting into this variety for the first time, said, in an astonished voice, “Wow it’s like an explosion of the essence of tomato.” This variety is the first to fruit for me and I picked my first handful just after Christmas this season.

Zucchini Nitro F1 h has great resistance to powdery mildew, a blight which polishes off most if not all older varieties of zucchini by early autumn. From a November sowing I picked this variety from January until April by which time I needed the space for other crops. I also planted a couple of seeds of Nitro in early February to see if I could get a late crop. I’ve been picking a one or two fruits a day from this late planting as I have with a Lebanese cucumber called Panama F1. This cucumber is very early to produce and whilst not as prolific from a late sowing I’ve been picking a couple of fruits a day from three plants for the past week or two.

Two years ago it was impossible to buy kale seed anywhere in the world. This worldwide shortage came hot on the heels of kale being declared the new super food. Apparently some people juice kale which doesn’t appeal to me at all. I mostly use it in a chickpea and tomato stew which is something like riballita, a hearty Tuscan soup. Kale keeps its colour well when cooked and I add it to the stew when all the other ingredients are done. In the past I’ve usually grown Black Tuscan Kale but this year I’ve grown one of the northern European varieties, a curly kale called Starbor. Starbor has very crisp tender leaves and you don’t need to discard the centre rib as you do with Tuscan Kale. We direct sowed the kale on the 8th of February. I pick leaves of the kale when needed and expect my half dozen plants to crop until the end of winter. 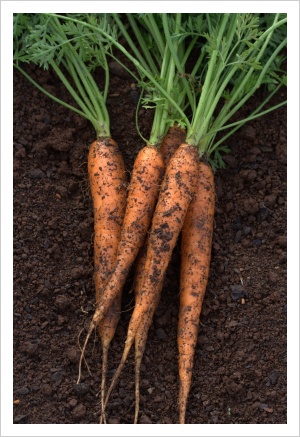 I sowed my winter carrot crop on the 13th of February and am just now pulling bunches of baby carrots. My youngest grandson, who is three, loves pulling carrots and would have them all out of the soil in an instant if I didn’t stop him. Nelson F1 is the best baby carrot for late autumn and winter cropping. It is very quick to grow and has delicious crisp sweet roots.

Another root crop which my children and grandchildren love is beetroot. They like me to cook this for them. Red Ace F1 is a good all round beetroot which so both good as a baby beet as well as a full size one. Even when it makes a very large size it doesn’t get a hard core. I’ve been harvesting roots from a 25th of January sowing for more than a month now.