Having spent my childhood and youth in the East Midlands of England, where the gloom of winter settled in early November and didn’t begin to lift until April, where I rode my bike to school in the dark and rode it back in the dark, Australia’s winter seems short and benign. No sooner has winter arrived than it’s all over. I just manage to get the perennials cut back before the first of the spring bulbs start to flower. Crocus sieberi ‘Firefly’ is one of the first, opening as it does in July. I’ve grown it for forty years and it never fails to put on a show. C. s. ‘Tricolor’ and ‘Bowles White’ are not as vigorous as ‘Firefly’ but are still good doers.

Crocus tommasinianus in all its variations is the easiest and most obliging of all crocus self sowing throughout the dry garden. One form Crocus tommasinianus ‘Roseus’ is the pinkest clone and when it opens, on a mild day, the flowers are large and star like. The white flowered form of C. tommasinianus that’s in the dry garden has very light flecks of mauve through it. This is the commercial strain sold by the Dutch bulb growers. I got another white form from Otto Fauser, which doesn’t have the flecking. Sadly it seems quite slow to build up.

Two groups of snowdrops are flowering in the dry garden now, both are exceptional doers. Galanthus elwesii has a very widespread distribution in the wild and can be found in lots of areas in both Greece and Turkey. Otto Fauser gave me fifty bulbs of Galanthus ‘S. Arnott’ as a garden warming present when Criss and I first bought “Burnside’. It has exquisite flowers, amongst the most beautiful in a genus of beauties, and is a terrific increaser so one bulb planted under trees will increase to ten or more after four or five years. Snowdrops are difficult to produce in commercial quantities however as they only seem to like growing under trees in spots where winter light can illuminate them. I’ve tried to grow them under shade cloth in the bulb field here but with no success. I asked a Dutch bulb exporter, on one of his annual visits to Australia, how Galanthus were grown in Holland. He told me that he buys the snowdrop bulbs from farmers who have them growing in copses on their farms not from commercial bulb growers who found it very difficult, if not impossible, to produce them in their bulb fields. The beginning of August would not be the same without the jewel of the dry Turkish mountains, Iris reticulata. I grow about a dozen different varieties. They all increase rapidly if planted in well drained soil which isn’t too acid. I give a regular top dressing of ground limestone and organic life fertiliser in late autumn. They prefer to be dry during summer, the drier the better. One bulb planted 3 or 4 years ago has increased to a dozen now. Iris reticulata doesn’t enjoy pot cultivation. A season in a pot wouldn’t hurt but they are much, much better planted in the garden. 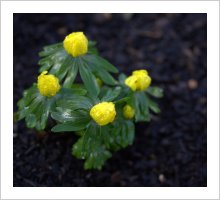 The winter aconite, Eranthis hyemalis, is widely naturalised in Europe where it flowers by the thousand in deciduous woodland. It’s one of the first flowers of the northern hemisphere new year where its bright yellow buttercup-like flowers are anticipated as a portend of spring. I tried to grow the winter aconite under some ancient elms but sadly they were overwhelmed by weeds. A couple of years ago I planted a different species, Eranthis cilicicus, by the side of a path under a Mount Fuji cherry. These bulbs have done really well and are now self sowing.