Winter Bulbs: What a difference a week makes

I’ve had just taken my first walk around the garden in early July after a week’s spell inside sitting in front of an open fire nursing a heavy cold.

A week ago there was very little in flower but as the song goes “What a difference a week makes.”

The early “spring” crocus opened for the first time today to greet a few sunny hours. Crocus tommasinianus self sows in the dry garden and we have flowers ranging from white through to deep violet-purple but mostly in soft mauve shades. The most showy of all of them is ‘Roseus’ which opens to large soft amethyst stars.

That good doer the Greek Crocus sieberi ssp attica ‘Firefly’ is flowering now with soft lilac, golden throated flowers. A more startling variety is C. s. ssp sublimis ‘Tricolor’ described by E.A.Bowles as being like a “richly purple egg in a golden cup tied with a white napkin”

Mid-July is snowdrop time. We only grow two varieties of Galanthus. Both soon make good multi bulb clumps. Galanthus elwesii begins to flower in June but is at its best now. It self sows freely in my garden and the original three bulbs I bought from Bryan Tonkin’s Nursery now number in the many hundreds if not thousands. 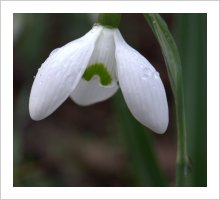 My other snowdrop is Galanthus nivalis ‘Arnott’s seedling’. I was given fifty bulbs of this by my dear friend Otto Fauser as a garden warming present when Criss and I bought the property 27 years ago. We grow it under a Japanese mapel where it increases at a decent pace making up to 10 bulbs from one every 4 or 5 years. It then needs dividing and replanting which is done when flowering has finished. ‘Arnott’s Seedling’ is much larger in flower than G. nivalis itself but is sterile never setting seed. 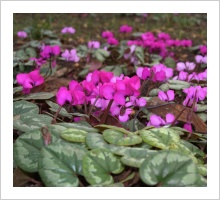 Cyclamen coum has been in full leaf for weeks if not months now. The range of foliage patterns rivals snowflakes in variety and intricacy but has only just started to show its stumpy flowers which come in shades of blush through soft to deep pink and magenta.

Flowering near one patch of the cyclamen is a winter aconite, Eranthis cilicicus, with its rich lemon-yellow buttercups. If it flowered during summer I probably wouldn’t take a lot of notice of it but flowering in the depths of winter it’s a joy. 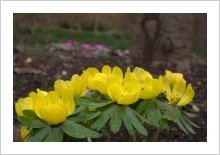 A lemon-yellow hoop petticoat daffodil makes a terrific display in July. I can’t remember its name but it was raised by the renowned Tasmanian daffodil breeder, Rod Barwick, and given to me by my friend the late Doug Bryce. Its flowering period overlaps the earlier flowering Narcissus cantabricus ‘Nylon Group’ which starts with us in May. All of these Narcissus cantabricus hybrids do really well, increasing prodigiously. One bulb will make a clump of up to fifty bulbs in a no time.