For four or five years a couple of decades ago I grew the heirloom watermelon ‘Moon and Stars’. In all those years not one ‘Moon and Stars’ melon ripened properly. This was because this melon takes up to 125 days to ripen which is problematic in our area where there are spring frosts as late as the third week in November and autumn frost as early as the end of April. 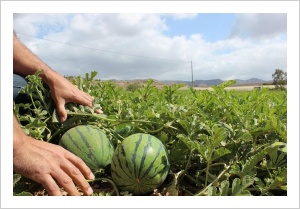 Watermelons need to grow, flower, set and ripen fruit within 90 days to be of any use here in the Central Highlands of Victoria. Over the years we’ve grown around twenty watermelon seed strains and have settled on two from the Dutch seed house Rijk Zwaan.

Rijk Zwaan have a major breeding and seed bulking facility in the nearby town of Musk which is just a few kilometres from Daylesford.

Most commercial crops of watermelon grown nowadays are seedless and whilst these don’t have the flavour of seeded watermelons they are the types that the supermarkets insist on getting. To set seedless watermelon fruit a pollinating variety is needed. These pollinators are distinctly different in size and looks from the seedless ones so as not to get them mixed up at harvest time.

In the past pollinators were not harvested so they didn’t have to be good eating but recently seed breeders have developed varieties that have great flavour. 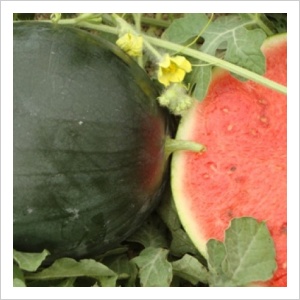 The two we’ve selected are the green-black skinned ‘Conguita’ and the tiger striped ‘Tigrinho’. Both are small, weighing in at 2-3 kg, making them ideal for home gardeners. Both have sweet, crisp, firm deep red flesh. The extended flowering period of both varieties, a necessity for pollinators, leads to a long harvest season. We’ve picked them this year from mid-February and expect to still be picking them at the end of March and into April.

‘Conguita’ and ‘Tigrinho’ are micro-seeded. Their seeds are so small as to be hardly noticeable. They are as close as can be to a seedless melon but with all the flavour of the seeded varieties.

We sow the seed of melons individually in 7.5 cm pots in early October in one of our poly-tunnels and plant them into the open garden after the danger of frosts is over in late November.