There are two viola species flowering in the garden with the tulips this year. Both are more tolerant of hot weather than pansies and commercial viola strains. Both are perennials or at least they are in my garden. 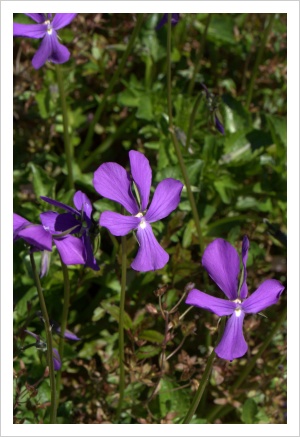 I’ve grown the Horned Pansy, Viola cornuta, for decades. It’s a great plant to fill in spaces between other perennials, roses and shrubs and will weave its way through and around them. If given an uncluttered spot it makes a low mat of lush green, fairly small oval leaves with, in my form, lightly fragrant, cobalt-violet flowers hovering like butterflies on 15cm thin sturdy stems. I once grew a white flowered form but lost it in one of my garden reorganisations.

Horned Pansy, a native of the French and Spanish Pyrenees, where it grows at an altitude of 1000-2000 metres gets both its specific name and popular name from the long thin nectar spur at the back of the flower. 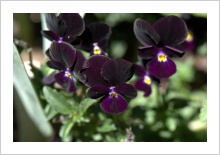 The second species is one I’ve grown for just a year or two. Viola tricolor ssp macedonica is native to a few areas in northern Greece and Macedonia. Whilst closely related to Johnny-Jump-Up it is perennial in my garden flowering for most of the year including winter. The flowers are one centimetre or so across and as black as any flower can be although in reality they are an incredibly dark purple. A yellow eye with cat’s whiskers radiating from it add to the charm. Genes from this subspecies may be in the well known Viola ‘Bowles Black’. V. macedonica has thrived both grown in a pot and in the garden. It will self sow but would need to be planted well away from other Violas to stay true to type.

The Violas grow with purple, pink and white tulips. In the same bed I’ve planted pink flowered for-get-me-nots as they make a charming foil for the tulips. The early Tulipa ‘Negrita’ has more light and life in its blooms than the later flowering T. ‘Queen of the Night’. Both are much the better for having the for-get-me-nots and wall flowers growing around them. Soft pink and white tulips also leaven what would be a too sombre picture if the purple tulips were planted on their own.