Until this season it had been years since I’d had a good crop of tomatoes. Tomatoes are susceptible to a great many pests and diseases; fungal, viral, bacterial and nematodal to name a few. Amateur vegetable growers like me aren’t the only people who have struggled to grow a decent crop of tomatoes during the last few years. Commercial growers the world over have had problems too. When I was a teenager I worked for my uncle who was a greenhouse tomato grower. The main variety he grew in the 1950s was called Money Maker and it filled several large glasshouses. One of my jobs was to water the pots the tomatoes were growing in with every Saturday morning. Money Maker is now classed as an heirloom variety “The oldest tomato variety in the world” as one seed supplier puts it. Goodness what does that make me? I’m as old as the “oldest tomato variety” in the world.

Money Maker is no longer grown by commercial producers as new pests and diseases made it unreliable. People like my uncle who rely on a good crop to make a living needed more disease resistant varieties. For a few decades researchers and seed houses forgot about the need for good flavour and concentrated on disease resistance and good looks. The same gene which gave tomatoes an overall red appearance also stifled the genes which gave tomatoes flavour. Traditional varieties such as Rouge de Marmande have a ring of green around the stem and this green shoulder was thought to inhibit sales. The tasteless varieties with the red gene filled supermarket shelves for decades from the 1960s on. These supermarket tomatoes were rightly derided by those of us who wanted good flavour not just good looks.

Enough of the general public also wanted decent tasting tomatoes so the seed breeders went back to their labs and after a long painstaking process bred hybrid tomato strains with good disease resistance packages, good looks, good shelf life and very importantly good flavour. Whilst the flavour of the best of these new strains isn’t quite as good as some of the old varieties, such as my favourites, Brandywine and Black Krim, if picked ripe they taste pretty good. As the older varieties won’t grow in my garden any way there isn’t any point of wasting time and space on them.

This year I’ve tried eight newly bred hybrid varieties. Five of these have gone the length of the season without showing signs of diseases. The other three to a greater or lesser extent were affected by one or other of the tomato wilts or viruses.

Three of the disease resistant varieties have terrific flavour when allowed to ripen on the vine. All three have been very heavy croppers, so heavy that it has been nigh on impossible to use all the fruit. We hope to list these three varieties in our winter catalogue. 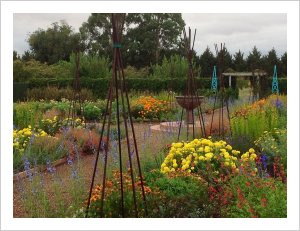 The vegetable garden looks beautiful at this time of year especially the flower borders along the central axis. The nasturtiums which we normally grow were badly burnt by a very hot day in early December so we pulled them out and planted an edging of Salvia azurea instead. The ethereal blue of this lax growing sage contrasts beautifully with the orange, red and yellows of the Gaillardias, marigolds, Humming Bird trumpets and Hibiscus ‘Fireball’ which are putting on a terrific show at the moment.