Three or four years ago my good friend Simon Rickard gave me a large tree peony. It flowered beautifully in my garden this year in a hot north facing spot near the public dunny. I couldn’t remember the tale behind this plant and asked Simon for any information he had on it. The following is his reply.

"The peony was growing in the house of a friend in Castlemaine. The house is 1930s vintage, and the peony was, I suspect from its size, planted around the 30s-50s. It was planted on the south side of the house, hard up against the wall under the eaves, where it received morning sun only, and could get its roots under the masonry of the house to stay cool. 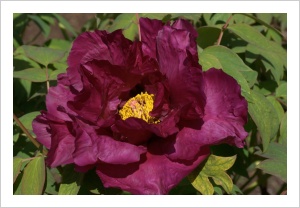 "The piece I gave you was only, maybe, 20% of the plant. I took a big chunk, gave several others to friends, and threw away a portion which had lost vigour. It was a very large shrub, for a tree peony, and had a root system to match.

"The black spots at the base of the petals, relatively small leaflets, early flowering season and particular growth habit suggest that most of its heritage is Paeonia rockii. In Chinese rockii types are called gansu-mudan (Gansu tree peony) or ziban-mudan (purple spot tree peony). P. rockii comes from Gansu province, which has a semi-arid climate, like Mildura's, and soils based on limestone with a pH as high as 9. So, although the flowers themselves are delicate, this type of peony is very tough indeed. They have a double dormancy, once in winter and again in summer, when things are too hot and dry to grow. They can actually jettison most of their leaves without harm and can look a bit shabby by late summer. They make structural root growth in autumn and feeder root growth in spring.

"I suspect that the ancestor of this particular peony was brought here by Chinese gold diggers. The Victorian goldfields have some very old specimens of Chinese-style peonies which I haven’t seen elsewhere in Australia. The one sold as ‘Etienne de France’ is the best known. Etienne doesn’t appear in any of the European or Japanese literature. It’s a classic Chinese type peony which the Japanese don’t care for, with full bombe shaped flowers which hang below the foliage. The tree peonies which entered European horticulture during the late 19th/early 20th century did so via Japan, where they grow a very different style of peony. All of the Kelways varieties (Duchess of Marlborough etc), for example, are merely re-christened Japanese peonies. So the fact that there are very large, old, specimens of Chinese-style peonies here in the goldfields suggests to me that they came directly from China, rather than from Japan via Old Blighty.

"As you know, tree peonies are very important in Chinese culture, and so valuable, that I imagine they would have been something that Chinese folks would have wanted to bring from home when migrating here, or perhaps have had seed sent to them by loved ones back home a generation or two down the track."