In My Late Winter Garden

Thirty five years ago I was working as a propagator for Boulters Nursery in the Dandenongs. At that time it was the biggest Rhododendron nursery in the country. My personal passion at that time was the alpine rhododendrons which cover high Himalayan passes as heather covers Scottish moors. I was trying to import some of these precious little plants from Peter Cox’s Glendoick nursery www.glendoick.com.

The first batch turned into silage when it was off-loaded onto the asphalt in Singapore and left for two weeks. The second batch was still in quarantine when out of the blue Otto Fauser, then unknown to me, rang about my imports. We had chatted for a while about rhododendrons when I asked what else he collected. “Fritillarias 95 species, Galanthus 38 varieties, all known species of Cyclamen, 50 or 60 different Crocus, a dozen Daphnes…….” And so on. I was on his doorstep early the next morning. We have been firm friends ever since. 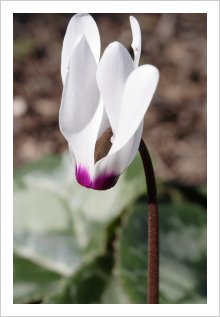 Otto’s life long passion for plants small, especially small bulbs, began when his family was interned in a camp in Palestine during the Second World War. Just outside the barbed wire enclosure wild Cyclamen persicum and Anemone coronaria, both blue and red forms, were in flower. Otto’s enthusiasm for the bulbs of the Mediterranean, the middle east, central Asia, Persia and Afghanistan was infectious and the flowers were so perfectly, so exquisitely beautiful that I started collecting myself.

When Criss and I moved to Ascot from the Dandenongs sixteen years ago the bulbs came with us and were planted in beds at the bottom of the nursery field. This Area wasn’t watered fed or weeded for twelve years and whilst I lost a lot of the more delicate bulb species the more robust ones not only survived but flourished. When we started work on the dry climate garden we dug up many of these bulbs and planted them under those perennials which are cut to the ground in late autumn. The bulbs finish their entire season’s growth cycle during winter and early spring which is precisely the time Sedums, Salvia nemorosa, Mexican Sage, Chinese Plumbago, herbaceous Agapanthus and the various Humming Bird Mints are dormant.

Cyclamen persicum has given rise to the florist’s cyclamen in all its forms and colours. Some modern ones are unspeakably bizarre but most make beautiful flowering pot plants. If they are kept on a cool sunny window sill they’ll flower happily for months during winter. Several plants of the wild form of C. persicum grow happily under an olive tree in the dry garden and, happily for me, are starting to self sow.

There was a sharp frost this morning and as usual this has been followed by one of those dreamy, still, sunny winter days, just the sort of day to encourage Crocus to unfurl their flowers. On dull days Crocus flowers are closed up. This protects their sexual parts from rain damage. Pollinating insects are also less likely to be around in wet cold weather.

Crocus tommasinianus, which hails from Dalmatia, is one of the easiest to grow and soon builds up large colonies, self-sowing happily. I dig and pull apart large clumps of these and other bulbs whilst they are in flower and whilst I’m thinking about it. As long as the bulbs are replanted straight away and given a cup full of water each to settle them in they won’t object.

A Greek species, Crocus sieberi, has made a decent sized drift in the dry garden and is happy there even though in nature it grows in quite moist places. I grow the form ‘Fire Fly’ which Otto Fauser gave me thirty years ago. It doesn’t set seed with me but by lifting, dividing and replanting numbers have soon built up. The first of the winter Crocus to flower is C. imperati from Italy, subdued buff with purple feathering when furled, opening on warmer days to bright lilac-purple. It starts flowering at the end of June and is still going strong near the end of July. 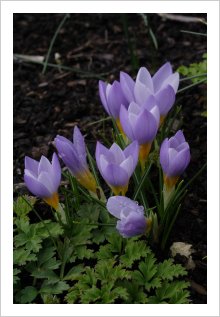 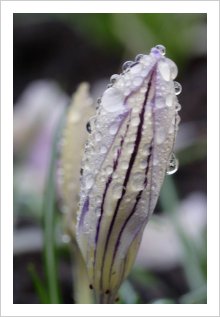 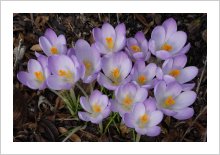 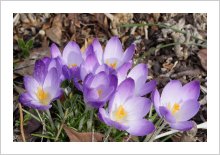 The winter flowering Hoop Petticoat Daffodils, Narcissus cantabricus and N. romieuxii and a number of sub-species, are out at the same time as the crocus and need the same conditions, winter rainfall and hot dry summers. There are many beautiful named forms. Shame to say I’ve lost the labels on the two that are pictured. A few bulbs of each were given to me ten years ago and now I have many hundreds. I think these particular ones were raised by Rod Barwick of Glenbrook bulbs.

I’ve planted garlic this week which is a month later than normal. A rough rule of thumb is to plant garlic on the shortest day and harvest it on the longest day. I grow enough to keep three households supplied from December until September and start harvesting green or spring garlic early November. I hate buying garlic especially the stuff that’s grown overseas. A good place to buy a variety of garlic bulbs for planting is the Australian Garlic Farm. www.garlicfarmsales.net.au. They have sold out of most varieties for this season and it would be wise to get in early for next season. Garlic needs fertile soil and some extra water during very dry periods in spring and early summer. I save the best bulbs each year for replanting and then only plant the larger outside ring of cloves.