Gardening With My Granchildren

“There are two sorts of people in the world. Those that have eaten fresh peas straight from the garden and those that haven’t” My grandchildren looked up, puzzled, as they absentmindedly threw empty pea shells onto the midden between the rows of pea plants in the vegie garden, momentarily forgetting Jeddah, my old Labrador, waiting to scoff any pods thrown his way. Lili, Takumi and Shogo tried to imagine what it would be like not to be able to pick and eat peas straight from the garden. The children had planted the pea seeds some three months before as they have planted most of the bigger vegetable seeds such as pumpkin, beans, beetroot, silver beet, courgette, spinach, melon and sweet corn.

One of the great joys is working in the vegetable garden with my grandchildren. They have their own spades, rakes and wheelbarrows. The three of them are much quicker than I am at digging, cleaning and carting garlic and onions to the shed to cure for storage. Shogo, then four years old, once asked my wife “Grandma why does grandpa love me so much? Is it because I help him dig the onions?”

If I was to be allowed to grow only one vegetable it would be garlic. It’s very easy to grow. I select the best garlic bulbs at the time they are dug and put them aside. Cloves from these, the healthiest and biggest bulbs will be replanted next season. Around the shortest day of the year I push decent sized cloves into a prepared, well nurtured raised bed. The cloves are planted twelve centimetres apart in the row and the rows are about forty centimetres apart. Garlic beds may need a little extra water during a dry spring, such as the last one, but are best kept dry during the second half of December.

I dig the mature bulbs around the longest day of the year either just before or just after Christmas. If digging is delayed too long there won’t be enough layers of skin left to protect the bulb during storage. After drying in a shed for a month or so the bulbs are cleaned up and brought into the house where they’ll keep in good condition until September.

September is Asparagus time. I have a single row about five metres long which produces enough for me to pick a bunch for lunch just about every day from the start of spring until Christmas and still have enough spare to give regular bunches to the children and grandchildren. If there is a chance of spring frosts I cover the emerging spears with pots overnight. I stop picking the spears after Christmas to allow the plants to build up strength for the following spring crop.

Asparagus is a long term crop. If looked after it will be productive for twenty years or more. A farm up the road has a patch that is still being picked forty years after planting. Because asparagus is in the same spot for so long it pays to prepare the soil really well. No short cuts. I work the soil to a depth of thirty centimetres (the best tool for making a new bed is a plumber’s trenching spade). Compost is then worked through the soil with some lime and organic fertilizer. I plant one year old seedlings which are raised in pots. Plants are usually available bare rooted during winter from mail order companies. 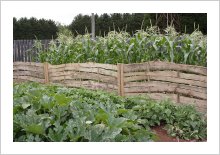 The main season for globe artichokes is spring although I often get a good autumn pick too. My favourite way of cooking artichokes is to make a stew of melted onions, kipfler potatoes, artichokes, fresh broad beans, freshly picked peas (dropped into the pot at the last minute) and chopped wild fennel leaves all simmered in chicken stock. Artichokes also make great frittata. Globe artichokes take up a good bit of room in the garden. Two metres by two metres wouldn’t be giving them too much space. I leave them in the same bed for three years. Good soil preparation gives me big plants which produce thirty or forty artichokes each. The last artichokes of the season are quite small and these are bottled in olive oil. As well as supplying the kitchen globe artichoke are amongst the most handsome of all foliage plants.

Chefs in posh restaurants are rediscovering rhubarb after many years of neglect. I grow four varieties, Winter Red, Silvan Red, Silvan Giant and Stan’s Giant, each one having its own season. As rhubarb plants stand in the same garden beds for years good soil preparation is essential. Stan’s Giant was given to me ten years ago by an old Ballarat gardener who had grown it from the 1930s. He was given it by the daughter of a gardener who used to win the rhubarb blue ribbon at the Ballarat Agricultural Show in the nineteenth century. As Stan grew it, this rhubarb made stems as thick as my wrist and one hundred and forty centimetres long. The leaves were so large you could use them as an umbrella. Plain old stewed rhubarb suits me pretty well but when the family comes for lunch I make rhubarb fool. I don’t tell the young women of the family, obsessed as they are with their weight, how much sugar and cream goes into making a good rhubarb fool as they’d quickly lose their appetite.

Talking of fools I grow a row of a dozen gooseberry plants. Of the two varieties I grow, Roaring Lion and Thornless, only the former gives me a good crop. My grandchildren and I gorge on gooseberries when the fruit gets crimson ripe, verging on being soft. This is the point when sweetness and acidity is in balance. Eating ripe home grown gooseberries is a totally different experience from trying to eat the bullet hard, inedible green things sold as gooseberries in supermarkets. Mind you I could say the same for all the fruit and vegetables my grandchildren and I grow. The difference in taste between shop bought fruit and vegetables and home grown fruit and vegetables is so immense that one can only feel sad for those that have never eaten a raw pea straight from the garden.

This article first appeared in the Diggers catalogue.