The garden varieties of Salvia nemorosa are amongst the most beautiful and obliging of all garden perennials. They flower for a good half of the year in the tough windswept plains of the Central Victorian Goldfields where I garden. They are frost hardy down to -20C and didn’t show any signs of distress when we had four days of 47C a couple of years ago.

Just after the second world war a young German nurseryman, Ernst Pagel, was given a seed packet of Meadow Sage, Salvia nemorosa, by his compatriot, the pacifist master gardener, Karl Foerster. Foerster told Pagel that there were three good plants in this packet, plant the seed and find them. 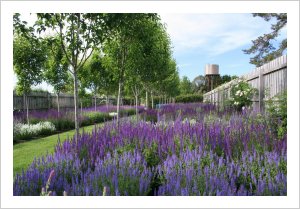 Pagel raised the seed, planted the seedlings in nursery beds and selected three plants. Those three plants are still grown in gardens throughout the world. They are the very dark violet early flowering Salvia nemorosa ‘Mainacht’ (May Night), the glowing violet-blue ‘Ostfriesland’ (East Friesland) and the neat, tidy, dwarf violet-blue ‘Lubecca’. Ernst Pagels went on to breed some of the best varieties of ornamental grasses and Achilleas. He was still breeding new plants well into his nineties.

The Pagel selections were the first named clones of Meadow Sage I ever grew. All three, to this day, glow in my garden even though I now grow a dozen or more newer cultivars.

This group of Salvias are so good and so telling because they hold their flower spikes well above the foliage. Maintenance is simple. The first flush of flowers begins in October, peaks in November and December and by the new year the best is over even though there are still lots of flowers left on the spikes. At Lambley all the Salvia nemorosa clones are cut to the ground just after Christmas. Within a week new growth appears and by early February flowering begins again. This second blooming goes on until May when again we cut them to the ground.

Mind you it’s much better to plant the named cutting grown varieties which have been selected by nurserymen over the past seventy odd years as being the best selections from millions of seedlings. Cheap seed raised strains are rarely if ever as good and should be avoided if you want a decent show. 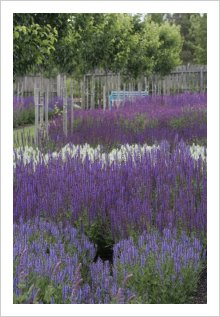 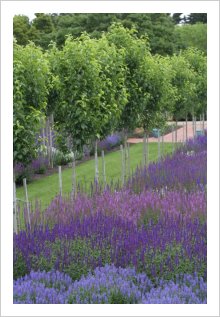 Last autumn I planted a garden for our granddaughter Molly. The garden is about 35 metres long. A wide grass walk is flanked on each side by 4 metre wide garden beds.  Molly’s birthday is in August so we planted several thousand Dutch Crocuses as these bulbs flower during that month. We then planted mirror image blocks of a dozen or so Salvia nemorosa cultivars. Musk roses have been planted against the fence to flower during late spring and early summer.

It’s difficult to choose the Salvia nemorosa varieties I think are the best as all of them are good but the following are some exceptional plants.