I grow a drift of the Snakeshead Fritillary, Fritillaria meleagris, under a deciduous shrub, Indigofera heterantha, and a herbaceous perennial Euphorbia ‘Excalibur’. In my garden this fritillary starts growing in winter and has all the winter and early spring light as it grows, flowers, seeds and fattens its bulbs whilst the shrub and perennial are dormant.

The bulbs are protected from the full blast of the summer sun as by that time the foliage of the perennials and the shrub shade them. The bulbs don’t ever dry out completely as this bed is watered every couple of weeks or so during dry periods. This species grows pretty well in pots too but really it does best in a moist spot in the garden. The elegant bell shaped flowers, large for the size of the plant, hang from a 30cm tall thin stem. My plants have been grown from seed and vary in colour from white through dusky pink, mauve and deep purple. If happy the bulbs increase well but to get a decent number relatively quickly they are best raised from seed. I sow the seed as soon as it is ripe in deep trays filled with well drained potting soil. The potting soil is levelled and the seed is sprinkled on top. I then put a 3mm thick layer of the smallest grade of washed blue metal on top. Any small sized gravel can be used. This layer of gravel keeps the soil surface moist and also inhibits the growth of moss and liverwort. I put the tray in a cool shaded position for the summer and when the weather cools down in autumn move it to a more open position. The seed will germinate the following winter. I generally leave the bulbs in the seed tray for two seasons as they are so tiny the first year. After two years I plant them into outside bulb beds which I shade during summer. All being well I will get flower two years later. It’s important to note that I never let the seedlings of this species ever dry out. As is the way of these things the most obliging and the best increaser of the genus is, to my eyes, the least beautiful, the least elegant, the least harmonious. Fritillaria uva-vulpis is a native of moist spots in the mountains of Turkey, northern Iraq and western Iran. In the garden it increases prolifically and is just as happy in a dry as in a moist spot. I grow it through a ground cover of Thymus longicaulis ssp. chaubadii. One or two flowers are carried on each 30 to 40cm tall stem. Whilst not unattractive it pales in comparison to most others of its kin. The purple-brown, yellow tipped flowers are small and out of proportion to its height and its leaves. It’s perhaps one of the Fritillarias that Reginald Farrer was referring to in his book The English Rock garden, when he wrote that some fritillaries have “more or less stinking bells of dingy chocolate and greenish tones, which often appear transfigured by the enthusiasm of those who desire to get rid of them as “rich purple” or “amaranthine violet”.” One of the jewels of the race also holds no terrors as far as cultivation goes. Fritillaria conica from southern Greece is one of the most beautiful of all small bulbs,  such an exquisite flower so perfectly poised and so elegantly balanced. Blue-green basal leaves serve as a plinth for a 10cm tall stem carrying one or two exquisite soft greenish yellow flowers. If happy it is an excellent increaser which soon makes good clumps. I grow it in one of my raised dry climate alpine beds. The soil here is well drained with lots of compost mixed in. I added a good handful of lime to a square metre before planting. To protect the flowers from splash a 1cm deep mulch of a fine grade of composted pine bark was spread over the bed after the bulbs were planted. Fritillaria rixii and F. sibthorpii (both now considered to be synonymous with F. euboeica) are similar plants and are treated in the same way. Fritillaria davisii comes from southern Greece too. It has large purple-brown flowers on 10cm tall stems. It makes lots of small rice grain bulbs which if rowed out into nursery beds will grow into flowering size bulbs in a couple of years.

Fritillaria obliqua, with its glossy black flowers, is rare both in the wild and in cultivation. It grows wild near Athens, where it is threatened by residential development, and the island of Euboea. Small bulbs have one flower to a stem which is how I like it most but as the bulbs get bigger, they get up to ping pong ball size, it has two or three flowers to a stem. Bulbs of this species are slow to increase so seed is the only way to get anything like reasonable numbers. Marcus Harvey (Hillview Rare Plants) a source of many fine bulbs sells this species occasionally and if you buy a couple then you will be able to collect your own seed. 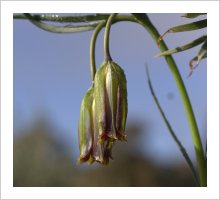 The last of these early flowering Fritillarias I’ll write about is the dainty F. stribrnyi. It has narrow, dusky purple and green tubular bells on 20cm tall stems. It has a quiet, graceful understated beauty. I grow this in the dry alpine beds.

When ripe, that is just as the capsule starts to split, I collect the seed of these dry climate Fritillarias. I dry the seed straight away but wait until early March before I plant it. I usually have very little seed of the rarer species I plant them in 10cm pots. I almost fill the pot with a loose well drained potting soil. I plant the seed on top of this and then just cover with a fine grade of washed blue metal. The seeds will germinate the first winter and I keep them moist until they die off in late spring or early summer. I then move the pot to a dry shed until the following March when I bring it out and start watering it again. After two years in the pot I transplant the bulbs into an outside bed. The bulbs should flower a couple of years later.