Grasses need maintenance to look their best. They need dividing, soil replenishing and cutting back at the right time. They also need feeding every year. The vast majority of ornamental grasses look at their best when they are relatively young as flowering is more beautiful and the flowering period is longer.

1) Miscanthus sinensis cultivars need some water during dry periods. Cut back to the ground from May, when they become sere, or July to get winter effect. Cut right to the ground and don’t leave ugly stumps. Best way is to tie baling twine around each plant before cutting back as then you have a sheaf which can easily be thrown onto a barrow. These cultivars need dividing at least every four or five years. Replant vigorous new growth from the side of the clump. A 15cm diameter piece will be enough. A space of at least 120cm is needed but for taller clones a spacing of 180cm would be better as this allows the plant to show off its fountain like shape. 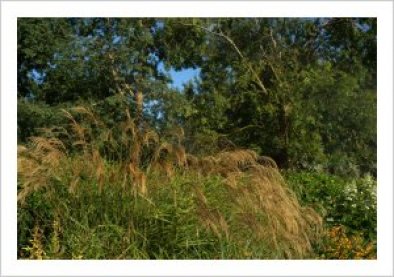 2) Miscanthus transmorrisonensis can be treated much the same as the above but it is an evergreen and young plants will keep flowering into late autumn. I generally cut this back in mid-winter. A spacing of 180cm is needed for to allow this beautiful grass to breathe.

3) Calamagrostis x acutiforus ‘Karl Foerster’ flowers early in the season and is lovely as it becomes sere later in the season as the clouds of soft mauve feathers, which sway with every breath of wind, turn gold and the stems become stiff. Although evergreen it needs to be cut back to keep it tidy. This best done before the end of June as it makes new growth early in the season. ‘Karl Foerster’ needs regular division and replanting, say every four or five years. A spacing of at least a metre between plants is about right. 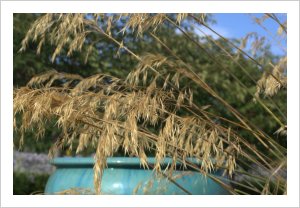 4) Stipa gigantea is an evergreen, spring flowering ornamental grass. Its extraordinary flower heads are ornamental from late spring until early autumn. Some of Piet Oudolf’s best planting schemes feature this grass. Early autumn is the time to cut it back as it makes new growth during autumn and winter. We take it down to a 15cm tall mound. Cutting any lower than this can damage the plant. It’s wise to plant Stipa gigantea in its permanent spot as it hates being lifted and even more hates being divided. The flowers of this grass spread much wider than the plant and so a spacing of at least 1.5 metres is advisable. Small growing daffodils and many other bulbs can be planted between the clumps

5) Poa sieberiana ‘Suggan Buggan’ is a handsome blue leaved native grass which flowers in the spring. After flowering, during early summer, it needs to be cut back to 15cm stumps (no lower). It will then grow new leaves and be an attractive until the following spring when it flowers again. A spacing of about 90cm is needed.

6) Stipa arundinacea (syn Anemathele lessoniana) is an evergreen grass which doesn’t really need cutting back every year as the old leaves get hidden by new ones each season. When we do tidy it up we trim back about half. A spacing of 100cm wouldn’t be too much for this grass.

7) Panicum virgatum cultivars rarely need dividing and replanting as they just get better and better every year. Cut them back any time from May until July. A spacing of 90cm or morefor most varieties would be about right.