It’s only during the last few years that I’ve started growing Zauschneria’s again. I grew them for a while thirty years or more ago whilst still living in the Dandenongs. They were plants I raised from seed and might not have performed well or, more likely, I could well have found the flower colour too strident.

I love using bright flowers now, oranges, yellows, scarlet, magenta, all the colours I used to avoid when the need to be seen to have “good taste” dominated my gardening. 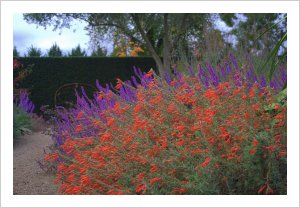 Recently Zauschneria have been lumped with willow herbs by botanists and are now known as Epilobium, a genus with more than its fair share of pernicious weeds. Horticulturally Zauschneria is so distinct from Epilobium that gardeners, nurserymen and some botanists still use the name Zauschneria.

Humming Bird Mints are natives of western North America from Mexico and California into Oregon and Wyoming. They flower during late summer and autumn when there is little competition from other flowers for the attention of their humming bird pollinators.  Humming Birds swarm over these plants when they are in flower but the resident New Holland Honeyeaters here at Lambley rarely find them attractive. This could be because we have a lot of plants which flower at the same time as the Zauschneria.

Californian gardeners have been selecting good forms for many years and at Lambley we grow half a dozen different clones. Most need a sunny well drained spot in the garden and none like very heavy soils. Whilst shrubby they are best treated as perennials and cut to the ground during late autumn or early winter. They are fairly drought tolerant but in normal summers still need an occasional watering. I’ve watered them a couple of times already this season.

As they are cut to the ground when winter and spring flowering bulbs are growing I under plant the Zauschneria with bulbs such as the yellow Lady Tulip, Tulipa clusiana chrysantha. The bulbs have finished their life cycle by the time the Zauschneria starts to shoot again in spring.

The following are varieties we grow at Lambley Zauschneria canum ‘Catalina’ was selected by Mike Evans in 1987 on Catalina Island which sits off the Californian coast near Los Angeles. I’d grow it for its fine silver foliage alone but when in late summer it produces brilliant vermillion flowers it’s a heart stopper. In my garden it grows to 60cm in height. It suckers a bit but as long as it isn’t planted close to small delicate subjects i 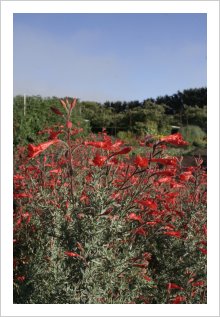 t does no harm.

Zauschneria ‘Bowman’s’ is similar in foliage effect to ‘Catalina’ with small silver leaves clothing 60 cm tall, stiffly  upright stems. It doesn’t sucker as much as ‘Catalina’ so it could be more useful in tighter spaces. The flowers are orange-red.

Zauschneria ‘Western Hills’ (main pic) makes an upright, shrubby plant, to 70cm, clothed in small grey-green leaves. The orange-red trumpet, produced in a long succession, are held well above the foliage on twiggy stems. I’ve planted it in the dry garden next to the dusky pink flowered Origanum ‘Santa Cruz’.

Zauschneria garretii is a dense low growing, green leaved species which soon makes a dense groundcover. The stems of orange-red trumpets are held on an oblique angle.

Zauschneria ‘Ed Carman’ has larger leaves and flowers than the other varieties I grow. It has done very well in a mixed border in the vegetable garden where it gets regular irrigation. In a very dry part of the garden it has done less well so perhaps it should be planted where it will be watered at least once a fortnight. The flowers are orange-red. It makes a rounded shrublet 50cm tall by 60cm across.

Zauschneria canum ‘Albiflora’ has white trumpets and green leaves on a low growing plant. It wasn’t happy when planted in a hot dry spot and probably would be better in light shade or at least a position that gets regular irrigation.