I first saw Ceanothus arboreus ‘Trewithen Blue’ growing in Pirianda Gardens, twenty acres filled with wonderful trees and shrubs. Mr and Mrs Harvey Ansell started this Dandenong’s  garden in 1959 and planted it with the best species and cultivars, many of which they imported themselves, more often than not from the famous British nursery, Hilliers. 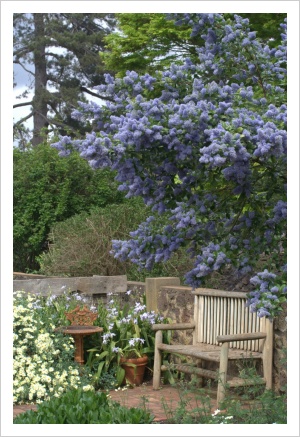 After Mr Ansell died I often drove Mrs Ansell, who by that time was quite frail, around the garden so that she could enjoy individual plants for which she had a special affection. One of these plants was the tree like Californian lilac, Ceanothus ‘Trewithen Blue’, growing as a specimen in the middle of a steep lawn. From memory it was some 6 metre tall and nearly as much across. During late winter it was smothered by large heads of mid-blue flowers.

I grow ‘Trewithen Blue’ in my own garden as both a large shrub and as a small tree.  With its large glossy evergreen foliage, dark green above and greyish below it is handsome the year round. This clone was selected in the famous Trewithen Gardens in Cornwall and was given the coveted Award of Garden Merit by the Royal Horticultural Society in 1967.

My least favourite Ceanothus is the one most commonly grown in Australia. Its shrill blue flowers can be seen dominating many a garden during its brief spring flowering. I’m talking about the plant sold as Ceanothus ‘Blue Pacific’ although its correct name is C. papilosus var. roweanus. Forty odd years ago I was working at Paramount Nursery in Melbourne when this plant was first introduced into Australia. This nursery, long since divided into house blocks, grew 10,000 ‘Blue Pacific’ plants every year. It was owned by the late Ron Gross, a tough, some would say hard, man who was one of the most progressive nurserymen of his day. I learnt an awful lot from him. 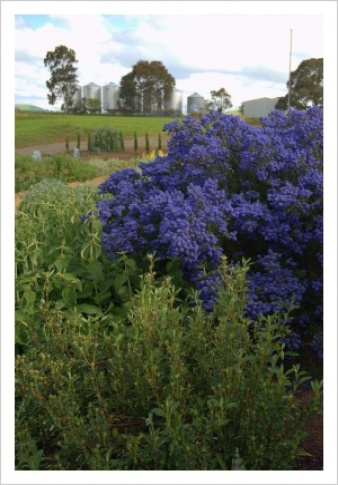 ‘Concha’ is not only one of the most beautiful Ceanothus but to my mind is one of the most beautiful of all evergreen shrubs. During spring magenta-purple buds open to a cloud of vivid dark blue flowers completely hides the small dark green leaves. In my garden it has made a plant some 300cm tall by as much across. It will take some summer irrigation and is as happy in both coastal and inland gardens.

Two low growing varieties are in full flower at the moment. Ceanothus ‘Blue Cushion’ and ‘Blue Sapphire’. The former was introduced in 1958 and makes a low spreading plant a metre tall by two metres diameter. It has small glossy green leaves and masses of soft blue flowers. ‘Blue Sapphire’, a sport of ‘Blue Cushion’ was selected twenty years ago in New Zealand. It has small glossy blackish green foliage and very dark blue flowers. Its habit is similar to ‘Blue Cushion’.

Five years ago I planted several Ceanothus thyrsiflorus var. griseus ‘Yankee Point’ on a hot dry north facing bank. Every year they make a terrific show of China blue flowers. Each plant will grow up to 120cm tall with a spread of 2 to 3 metres. ‘Yankee Point’ has been in cultivation since the 1950s when cuttings of it were collected on a windswept, rocky, Pacific coastal bluff in Monterey County, California. 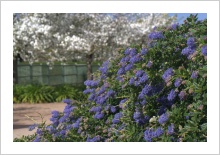 Ceanothus ‘Joyce Coulter’ is used as a groundcover in California where it typically makes an evergreen shrub some 100cm tall by 600cm across. In my garden, perhaps because I didn’t cut remove strong vertical growths, it has grown 200cm tall by 500cm across in eight years. It does have a lovely arching habit so it probably will stay low if pruned properly. It has been described as having “gentian-blue” flowers which it produces for many weeks if not months from late winter until mid spring. 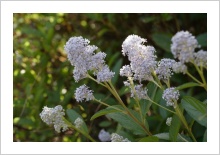 Finally I must mention the deciduous Ceanothus x delinianus ‘Gloire de Versailles’  which flowers on new season’s wood from late spring until autumn when orange-brown seed heads replace its powder-blue flowers. I prune this shrub every winter taking off about a third of its growth. It’s been in the same spot in my garden for twenty years and still looks good. This hybrid was made in France early in the 19th century and is still widely grown in northern Europe as it is very frost hardy.

Ceanothus are easy to grow in any sunny well drained spot. If kept on the dry side during summer they will live many years. Heavy summer irrigation is the usual cause of death. Occasionally a leaf miner will affect ‘Yankee Point’ in my garden otherwise they cause me no problems.

Over the years many more species and cultivars have been imported into Australia. It is important that these are preserved as we are no longer allowed to bring new varieties in as the genus is thought to be a host to the Sudden Oak Death fungus which is killing oaks in California.