We’re sowing our main crop onion seeds this week. The strain we’ll be sowing is Tilbury F1. We grew Tilbury for the first time last year and had a terrific result. Harvested mid January the onions are still in excellent condition now in mid August as you can see from the photograph. 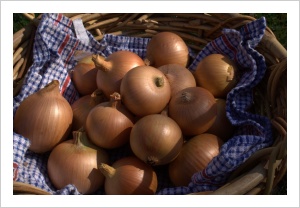 Tilbury has been bred specifically for Australian conditions from New Zealand Pukehohe Long Keeper (PLK) strains. It is one of the longest storing onions having more skins than tradition PLK and fewer if any thick necks. Onions with thick necks don’t store as well as those with thin necks.

Whilst an F1 hybrid Tilbury isn’t genetically modified. Seed can be saved and resown. Whilst this isn’t advised for professional growers the results will be fine for home gardeners.

For those who don’t want to sow F1 hybrid seed Lambley’s selected strain of open pollinated Pukehohe Long Keeper will give good results.

There has been some terrific breeding work going on in France over the past few years into new varieties of Florence bulbing fennel. This week we’ll sow Tauro F1, a baby to mid-sized fennel. As it is slow to bolt Tauro can be sown from mid-August until December for cropping during spring, summer and autumn. During January and February we’ll sow the main crop, full size variety Leonardo F1 for late autumn and winter cropping.

Zeppo F1 is the best beetroot we’ve ever grown. It’s has beautiful round roots even as a very small baby and is tender and without a hard core at full size. We’re still pulling roots now in mid August from an early autumn sowing. We expect to be able to harvest the first of our August sowings by the middle of October.

A second sowing of peas will go in this week too. We’ll be sticking to those strains which are resistant to powdery mildew in case we get some hot dry weather before harvest. Shelling pea Willow, sugar snap pea Sugar Bon and snow pea Green Devil all have good resistance to powdery mildew.

Mokum F1 which is a world leader in baby carrot production and is considered to be the best flavoured of all the bunching carrots. From sowing to harvest is about 80 days. A small sowing from late winter until February and a larger one in March will keep us supplied for most of the year.

Romance F1 has a really good sweet flavour and can be sown from mid-August until late February for year round harvest.

Carrot seed shouldn’t be sown to deeply, 5mm is deep enough. Soil should be deep and friable. Mixing animal manures in the soil will cause forking of the roots. We sow carrots in beds where we’ve just cropped brassicas.