I was reading about one of the great 19th century head gardeners, James Barnes of Bicton, on the same day as I picked my first purple sprouting broccoli for the year. Called Italian asparagus when first introduced into England in the early eighteenth century, purple sprouting broccoli has a much more delicate and delicious flavour than the large headed Calabrese broccoli found in every supermarket in the land. 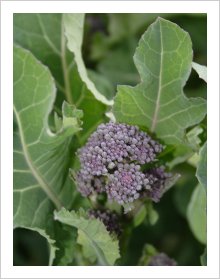 I planted seeds of five different English strains last November and the earliest, Rudolph, started producing its small purple heads during the second week of July. I’ll be picking the late varieties well into November. This kind of broccoli isn’t for the impatient. Seed has to be planted in pots or in a seed bed during late spring or early summer and transplanted early in the new year if a decent crop is to be had the following winter and spring. I usually simplify the process by planting the seed straight into their final position. This method needs more care keeping the young seedlings weed free but a lot of time and fuss is saved with this system and the deeper and stronger roots produced is a bonus. Well grown purple sprouting broccoli plants make large frames a metre tall by as much wide and each plant can give a bunch of its small purple heads every second day or so for at least a month.

I treat Brussels Sprouts in much the same way although I always get this seed in by early November as any later planting is a waste of time and unlikely to be successful. A planting of early, mid season and late varieties gives a pick of sprouts from late April until August. Freshly picked sprouts have none of the off smell that supermarket sprouts have and are delicious sliced finely and braised slowly in butter. My first memory of this vegetable, besides eating it, was as a seven years old child when I helped my mother pick an acre field of sprouts. As there had been a good snowfall a day or so before we gave each plant a sharp kick to dislodge the snow from the crown before stripping the sprouts into buckets. 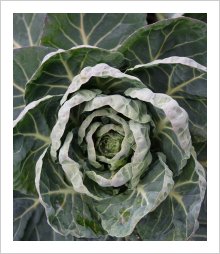 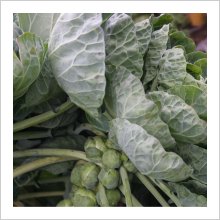 Talking of Brussels Sprouts leads me back to John Barnes of Bicton. He produced prodigious amounts of fruit and vegetables for the owners of Bicton and always grew the best and the latest improved seed strains. He would have been perplexed by the modern fad for growing heritage vegetables. I’ve grown three varieties of heritage Brussels Sprouts seed and not had a sprout. I now grow modern varieties and have good crops every year.

I have given up on heritage seeds, garden centre and supermarket seeds and buy from suppliers who also service smaller market gardeners. The seed from the Johnny’s Selected Seeds, an American company, and Chase Seeds a British company are the best I’ve ever grown. Some of it is hybrid seed some of it open pollinated but all of it tested and all of it productive.

I don’t use chemical pesticides on any of my vegetables. I keep cabbage white butterflies off my brassicas by using a twice weekly drench of Dipel which is a dried bacteria which only attacks caterpillars. I mix it in a watering can.