The nursery trade calls at least three genera of bulbs autumn crocus. Obviously this causes more than a little confusion amongst gardeners. 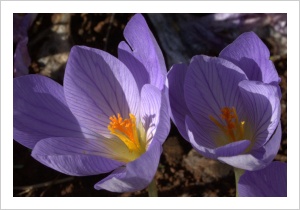 True Crocus are in the Iris family. Long thought to have ninety species in the genus lately chromosome tests have raised this to nearly two hundred. Their native range is from Portugal and Morocco to western China. Most species are winter or spring flowering but there are a few that bloom in the autumn which are available to Australian gardeners.. Crocus flowers have three stamens and narrow leaves with a central white stripe on the upper surface. 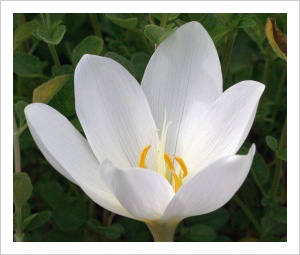 Colchicum are often called Autumn Crocus but they are in the totally different family of Colchicaceae although for many years they were classed as Liliaceae. Colchicum flowers have six stamens and (generally large) leaves with no stripe. Most species likely to be met with in Australian gardens are from Turkey and Greece.

Zephyranthes, a New World genus, have also been called Autumn Crocus. One species in particular, Zephyranthes candida from Argentina and nearby countries, was sold a few years ago in vast quantities. It’s probably better to call this species Rain Lilies as summer and autumn showers trigger flowering. I grew it for many years and found it to be evergreen as long as it was watered during dry spells. It is in the Amaryllidaceae family. 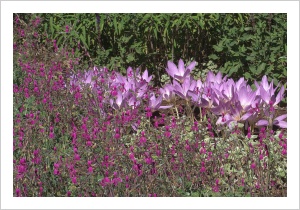 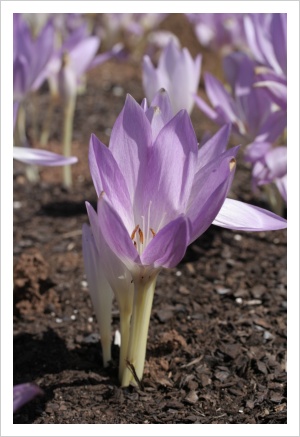 Lambley has a good selection of both autumn flowering Crocus and Colchicum. All are beautiful but one in particular, Colchicum speciosum ‘Album’ is considered by many gardeners to be one of the most beautiful of all flowering bulbs with large pure white perfectly shaped chalices. Having said that all the varieties of Colchicum we offer this year are beautiful. 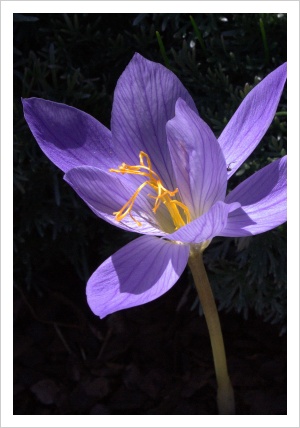 Crocus speciosus as a group is arguably the finest of the autumn flowered crocus species with a widespread distribution in South Eastern Europe, Turkey, Caucasus and Iran. E.A. Bowles wrote sixty years ago “...... but best of all it is beautiful and hardy.... Left to go its own way it will spread freely in borders and even under deciduous shrubs, and then provides carpets and mimic pools of blue in autumn as rich as those of bluebells in spring.” This species grows easily here planted under prostrate thyme.