“Aster x frikartii ‘Monch’ is not only the finest perennial aster; it is one of the six best plants, and should be in every garden.” G.S. Thomas Perennial Garden 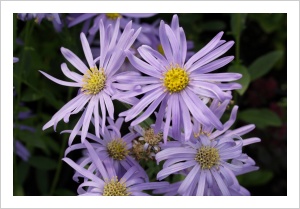 Dennis Norgate grew Aster x frikartii, for almost 70 years from the mid 1940s until he finally put down his hoe just a few years back. It was at Norgate’s Plant Farm that I first saw it growing more than fifty years ago. 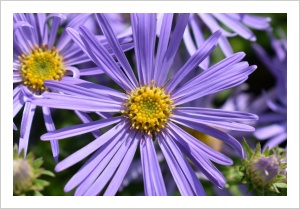 Aster x frikartii is a hyrid between Aster amellus, which has a widespread distribution from Spain to Central Asia, and A. thomsonii from the western Himalayas.

The cross was made by the Swiss nurseryman Carl Ludwig Frikart in 1918. In 1920 he selected three clones and named them after three famous mountains, ‘Eiger’, ‘Jungfrau’, and ‘Monch’. The cultivar Norgate grew was ‘Jungfrau’. Lambley imported ‘Monch’ from Hannay’s Nursery in Bath twenty five years ago. Both do really well in the garden here if planted in a sunny spot which isn’t allowed to parch during hot weather. Flowering begins in February and continues well into mid-April which is far longer than any other perennial aster.

You would think that with the success of the original cross there would be more cultivars raised but although many have tried it has proved difficult to repeat Frikart’s work. Frikart himself released ‘Wunder von Staffa’ in 1924 but it isn’t as good a plant as his first three seedlings.

The famous English nurseryman Allan Bloom, who I had the good fortune to meet when he was in his nineties, was successful in crossing A. Amellus with A. Thomsonii ‘Nana’ and called his cultivar ‘Flora’s Delight’ after his wife Flora Bloom. 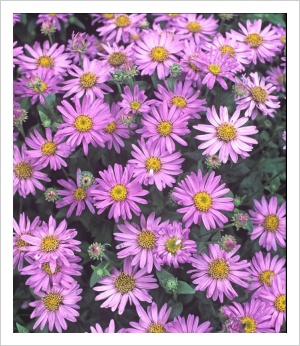 ‘Flora’s Delight’ which I did grow for a while was nowhere near as beautiful as Frikart’s original hybrids.

Aster x frikartii is rarely seen in nurseries today. This scarcity is more than likely caused by the difficulty in producing saleable plants. It takes nearly two years to produce a good quality plant whereas an Aster novi-belgii variety can be produced in three months.