“Anthemis ‘E. C. Buxton’ is cool lemon-yellow, invaluable in the garden and for picking. This variety stands out as the most useful and admirable of all the (very few) light yellow summer-flowering plants, and a summer border without it is difficult to conceive.”
G.S. Thomas: Perennial Garden Plants (1976)

Raised by E. C. Buxton in the beautiful Welsh village of Betwys-y-Coed, which lies in the Conwy valley in the Snowdonia National Park, Anthemis ‘E. C. Buxton’ was long ago judged by the Royal Horticultural Society to be worthy of an Award of Garden Merit. This coveted award is only bestowed on plants of exceptional quality. 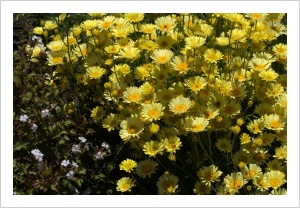 The late Dame Elisabeth Murdoch started me off with a few cuttings of this Anthemis forty odd years ago. Dame Elisabeth had got it from her older sister Sylvia Ritchie, who gardened at Delatite near Mansfield in north-east Victoria. Mrs Ritchie had imported plants of it from England.

For the past 25 years ‘E. C. Buxton’ has been growing in the Lambley dry garden. Whilst it always puts on a decent spring early summer show flowering was relatively brief, just a few weeks during late spring and early summer.

Three or four years ago a decent sized group, one and a half metres by a metre, was planted in a long mixed flower border in the vegetable garden. This is a well nurtured and well watered area full of compost and earth worms.

What a difference this luxurious living has made to the Anthemis. It’s as though it’s a different plant. The patch has borne a countless number of perfect lemon daisies standing proud above deep green ferny from November until the end of April.